How much do my characters reflect me?

A friend of mine asked me, in regard to The Private Misadventures of Nell Nobody, if my protagonist was ‘me’.

To be honest, I didn’t originally know how to interpret that question. Was it complementary, or was it ‘Are you giving me your fantasy life to read?’

Well, let me start out by listing ways that I am NOT my heroine.

1. I have never been a victim of toxic misogyny or sexual assault.

3. I cannot even hit a stationary target with a Brown Bess musket, let alone a moving one. I’ve never fired a Ferguson rifle, but there’s no reason to believe that would be any different.

4. I do not make a convincing boy.

5. I get horribly seasick. (Okay, I gave that characteristic to Jack Mackay.)

6. I have reason to doubt that I would be anything but terrified during a naval gun battle.

Shall I go on?

I suppose all my characters are equally a reflection of me, since they are creations of my imagination, but I believe that’s the extent of it. I hope that the male characters I create are equally as convincing as the female ones. I write the kind of story that I would like to read, because if I wouldn’t want to read it, I couldn’t possibly write it.

Obviously, I’ve drawn on my experience as a historical interpreter, and years worth of research into the Georgian Royal Navy and the life of Horatio Nelson. I find him a compelling character and an endlessly fascinating person, and I wanted to write about him. There will always be people who write better scholarly research, and I’m just an interpreter of history, not a true historian. But that’s really what a novelist does, isn’t it? We interpret events, and people’s motivations, actions, and goals. We examine what people value, and what they’re willing to do to acquire it. We put characters into heroic situations and see how they react. All in the guise of a good story.

If my friend wants to think that I’m revealing my secret lives in my fiction, that’s his prerogative… but just between you and me, I think I’ll keep my fantasies to myself. 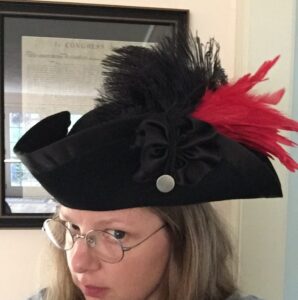